Most women's bodies, due to anatomy, have natural curves. Slopes that society has turned into cultural representation. The traditional S-shape curve of a female body is a common cultural symbol for women.

I desire that or at least the illusion of it. A few years ago I noticed women wearing dresses that make their bodies look very curvy. I realized the dresses create an optical illusion -- an emphasized curvy area is surrounded by negative space. Our eyes see the curves and reject the rest of the image (which are, in fact, other parts of the woman's body).

I wondered if this illusion could work for me. I've been on the lookout for a dress like this for a few months. Most are expensive and available only in tony boutiques. Finally, I spotted one at a thrift-store for $8. It isn't as exaggerated with curves as others are, but it's better than nothing. What do you think? 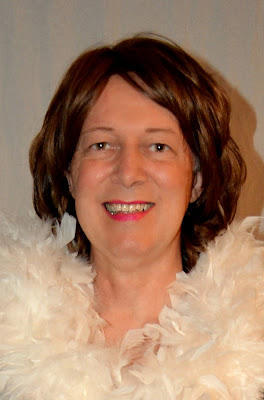