I challenged you to dress up in male clothing and see how it feels.  Two brave gals tried and now a third has given it a shot.

Piper, who blogs from Chicago, just posted pictures of her experience as a man.  Piper went the whole hog, with glued-on facial hair and clothes from her brother.  She looks very convincing, if you don't notice her elegant long fingernails.

Piper wore this outfit in public on Halloween.  She said it was odd using the Ladies Room where she initially confused fellow patrons.  That mirrors my experience, at a Halloween catering hall party dressed as Alice Kramden, when I used the Mens Room.

Piper also reports the guy she was with felt "weirded out" by her appearance.  Again, no surprise.  Crossing the gender divide messes with a fundamental part of people's psyche.

Piper has a nice blog where, normally, she looks very feminine.  If you're not familiar with it, check it out. 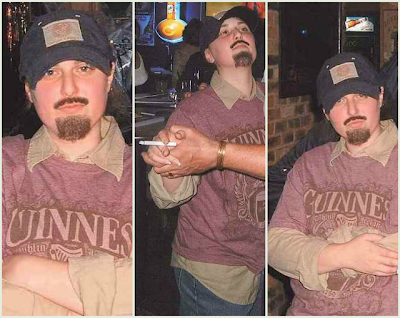