Some people say it's taboo to talk openly about money.  But I'm willing to ride a motorcycle wearing a tutu, so you know my attitude toward "rules."  :-)

I had an interesting, visceral experience last night that served as a catalyst for some reflection about society.  Let me share my thoughts with you and invite you to toss yours in the ring.

What's your attitude toward wealth?

I was raised in a lower middle-class immigrant family which instilled a sense of frugality in me.  I shop in thrift-stores, look for bargains and rarely spend extravagantly.  I balance this natural tendency, however, with small flights of luxury that I savor for their rarity.  For example, I've sucked down a tiny tin of $400 caviar and I wear $200 cufflinks made from a real MLB game-played baseball.

When I've been working too hard (as recently), I grant myself an indulgence.  I find such rewards to be therapeutic.  Especially if they are on someone else's dime.

For Christmas, a client gave me a $100 gift-card to a fancy sushi restaurant.  I like the place and went there last night.  The card barely covered my meal for one.  In fairness, the food was extraordinary.

The restaurant is in the most expensive shopping center in our region.  Called the Americana, the shopping center has such tony stores as Tiffany & Co., Dior, Hermes, Cartier, Prada, Fendi and Armani.  Before dining, I walked around and browsed.  I saw a dress for $8,500 and a scarf for $1,200.  The jewelry was in the five- and six-figure range.

I wondered who pays such high prices.  Neither I nor anyone I know.  Then I remembered a woman here whose rich husband gives her a clothing allowance of $25,000 per month.  Per MONTH.  Seriously.  She shops at the Americana regularly.  Where else can you burn through that much money on a regular basis?  Old Navy?

So I was travelling in the land of the wealthy.  It was an odd sensation, like visiting an exotic country.  Suddenly, walking through the parking lot, I stopped dead in my tracks.  I saw a creature I'd never thought I'd see in person.  One I knew existed but was stunned to confront in the flesh.  One of these... 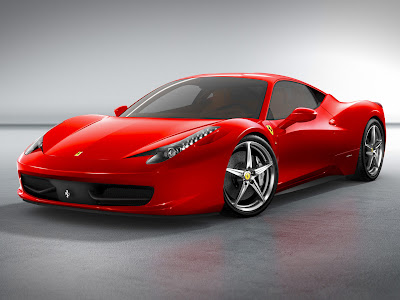 This automotive sculpture is a Ferrari.  It costs more than my house.  No kidding.

I was so surprised I couldn't move.  I felt like I'd met a unicorn.  The Ferrari looks fast standing still.  It possesses a quality of high performance that is palpable.

Staring at the car for ten minutes, I wondered who owns such an extravagance.  Of course it isn't their regular car; it's the vehicle they take to the Americana to be seen by their rich friends.  If you want to impress people, pull up in a half-million dollar racing car.

The lives of the rich really are different from ours.  How do you feel about that?
Posted by Shybiker at 9:00 AM