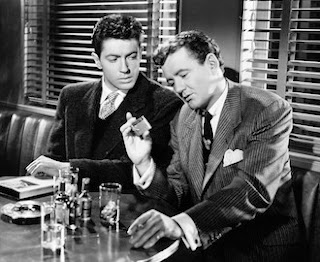 I love spotting an actor in a movie and realizing I know them from somewhere but having to rack my brain to figure out where.  Ultimately, I remember and it's fun to solve the puzzle.

Today, I watched one of Alfred Hitchcock's best films, "Strangers On A Train."  It's a murder-mystery about two men who meet on a train and concoct a plan to kill people in each other's lives.  If you haven't seen it, you should.  The film is suspenseful, gripping and artistically accomplished.

One of the main actors (Kasey Rogers) is a young woman who refuses to grant her husband a divorce, so the other train-stranger murders her.  Kasey looked familiar and I realized how -- years later, she appeared in the TV show "Bewitched" as Louise Tate.  Another of the actors (Leo G. Carroll) is instantly recognizable as the Chief in my favorite TV show of all time, "The Man From U.N.C.L.E."  Finally, a third actor in the movie (Farley Granger) had bit parts in several TV shows, including the hilarious "Get Smart."

There are two more actors in the film with stories to tell.  The most amusing character in the movie is played by Patricia Hitchcock who, as you probably guessed, is Alfred's daughter.   She gives a great comic performance.

The lead actor in the movie is a charming young man named Robert Walker.  He was only 32 years old when the movie was made.  Tragically, Walker died the same year.  He was distraught that the love of his life had fallen for a powerful Hollywood producer (David O. Selznick) and, after drinking too much, he acted erratic.  A doctor gave him a sedative to calm him down, but he had an allergic reaction to it and died.  At age 32.  At the start of a promising career as an A-list Hollywood actor.  How tragic.

Do you ever spot actors in movies you recognize from elsewhere?  If you do and can't figure out where, the best place to learn that information is the most useful entertainment website, the Internet Movie Database.
Posted by Shybiker at 10:57 AM