I have a friend, April.  She is a rare breed.  April is different from most of us.  In fact, you've probably never met anyone like her. 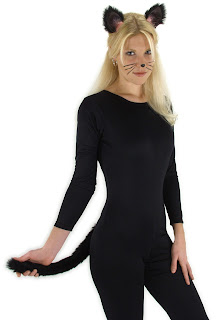 When April gets to know you, she explains her unusual story.  Every since she was little, April felt different from the other kids.  When they squealed, she purred.  When they played with dolls, she played with balls of yarn.  April says she feels like a cat trapped in a woman's body.  And she's felt that way ever since she was a kitten.

Science labels April as "transspecies."  April is convinced she is a cat.  Actually, the politically-correct term is "Feline-American."  Nothing makes April happier than to curl up in a ball and meow.  Her favorite drink is milk -- which she prefers to lap from a saucer.  April, in private, puts on a specially-designed tail and rhinestone collar.  For naps, she likes to hop on top of her bookcase, a perch where she feels safe.

Of course, most of you probably don't understand this.  People like April are different from the rest of us.  But it's important to look in our hearts for compassion.  Kindness exhibited toward those who deviate from society's norms is benevolent and greatly appreciated.

April usually keeps her story secret to avoid being mocked... and told to get off the couch.  When people learn April is feline, they complain about the hair she sheds on their furniture and clothes.  April, of course, is skittish around dogs and thinks they're slobbering beasts.

If you haven't realized by now, April's last name is Fool!
Posted by Shybiker at 12:28 AM