Loren recently asked people on her blog about big events that occurred where they live.  Her question got me thinking about a scandal that happened here on Long Island.  The story dominated the national news for years.  It had everything -- sex, violence and cultural stereotypes.  If you're too young to remember this episode, it's a juicy story to hear. 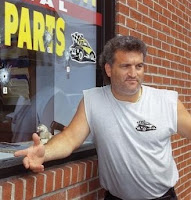 Twenty years ago, a middle-aged cad named Joey Buttafuoco worked in an auto-body shop.  He was a sleazy guy who embraced the prevailing macho culture of Italian-American men.  Despite being married to a lovely woman (Mary Jo), Joey cheated on her.  With a teenage girl.

What kind of 36-year old sleazeball has an affair with a teenage girl?  Joey.  That's him over on the left.

Unfortunately, the girl he was seeing was a nutball herself.  Amy Fisher was young Jewish girl who, when she was 16, damaged her parents' car.  She took the car to Joey's shop and asked him to fix it without telling her parents so she wouldn't get in trouble.  Joey, sensing an opportunity, agreed to do that.  And more.  After fixing the car, Joey returned it to 16-year old Amy and hit on her.  The two started having sex.  Frequently.

Amy fell in love with Joey.  In her pea-brain, Amy figured a solution to the problem of Joey's wife Mary Jo being in the picture.  Amy did what any young woman would do -- she borrowed a gun, drove over to the Buttafuoco residence, knocked on the door, and told Mary Jo that she loved Joey and wanted him all to herself.  When Mary Jo scoffed, Amy pulled out the gun and shot Mary Jo in the head.

Miraculously, even though a bullet entered her skull, Mary Jo survived.  Without any damage.  She had a bullet lodged in her brain but it didn't harm her.

The story became a huge media sensation.  Everyone had an opinion on who was right and who was wrong.  Since sexism and the cultural stereotypes of Italian-American men and Jewish women were prevalent then, people expressed their views with reference to these ideas.

The scandal was in the newspaper every day for years.  Amy acquired the nickname, "Long Island Lolita."  I personally once went to court for a routine matter and was startled to see a dozen TV news trucks with satellites: reporters from all over the world (even from Japan) were anxiously waiting for Joey and Amy to appear in court.

For over a decade, whenever I'd mention to anyone that I came from Long Island, they'd go -- "Oh, do you know Joey Buttafuoco?"  And I'd cringe.  Joey and Amy are nobody's choice for representative of their hometown.

Have you heard this story?
Posted by Shybiker at 7:56 PM