Here is a true story with more bathos than a soap opera.  It was mentioned in the news this week because one of the participants just died. 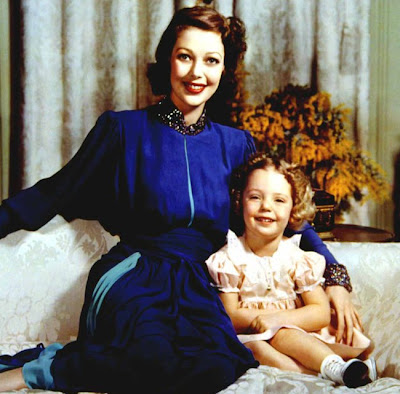 In 1935, a young actress named Loretta Young had a budding career in Hollywood.  She was single and attractive.  Loretta became romantically involved with a famous movie-star, even though he was married to another woman.  The two had an affair and Loretta became pregnant.  You probably recognize her boyfriend -- he was Clark Gable.  Yes, the guy from "Gone With The Wind" and several other big movies.

Loretta was afraid a sex scandal would ruin her career so she left town.  She lived in Europe while pregnant and gave birth to a baby girl.  Loretta returned to Hollywood after the baby was born.  To explain the child's existence, Loretta announced through famed gossip columnist Louella Parsons that Loretta had adopted the girl.  Loretta told the girl, as she was growing up, that she was adopted.  Loretta never told the girl who her father was.

The girl, Judy Lewis, thought she was adopted and had no known father, when in fact her parents were Hollywood royalty.  Loretta Young made dozens of movies and won an Oscar for her role in "The Farmer's Daughter" (1947).  She had her own TV show, named after her, for which she won three Emmys.

In 1966, when her daughter was 31 years old, Loretta tearfully confessed to the girl that she was not adopted but was actually Loretta's biological child.  Loretta refused, however, to admit this publicly or to say she'd had an affair with Clark Gable.  She kept that secret until she died in 2000.  She revealed it in a book published after her death.

Loretta's daughter Judy looks just like her parents.  Judy died last week and received obituaries in all the major newspapers.

What do you think of this?
Posted by Shybiker at 11:58 PM