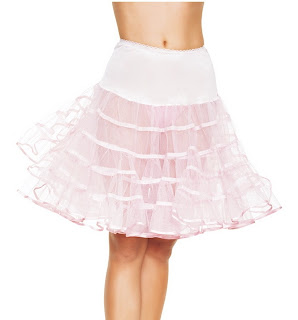 I broke The First Law of Thrifting.  As a result, the Goddess of Fashion punished me.  My pain is palpable.  My dolor is deep.

Yesterday, on the way home from Court, I stopped by my favorite thrift-store.  I browsed the racks and -- lo and behold! -- I spied The Holy Grail.  Or at least *my* Holy Grail.

It was a pristine, white petticoat with huge, fluffy ruffles.  Amazingly, it was priced only $6.  Six dollars!  Yes, it was a few sizes too small but, with an undergarment, I could handle that.  The fix wouldn't be pretty but it'd be hidden.

A petticoat may seem an odd item to you but for me -- someone who's ached to wear ruffles my whole life -- it is the epitome of femininity.  The pinnacle of pulchritude.  The height of adornment.  That, and it widens my hips to give my cylindrical body the illusion of curves.  Finding clothes like this is not a quotidian event for me.

Here's where I made my mistake...

I was riding my motorcycle which has some storage space but too little for a fluffy petticoat.  I'm not kidding when I say this item was over four feet wide.  It stretched almost straight out to the sides.  Since I wouldn't be able to fit it in my bike's trunk, I decided to come back the next day with a borrowed car.  I could carry it home in the car.

Can you imagine what happened next?  Well... I drove back with the car, leaped into the store, bounded down the aisle and... what? huh?  Where is it?!!!

Yes, over the span of one day, the treasure was plundered.  Stolen by another, smarter shopper.  Someone who wasn't riding a motorcycle.

Looking back, I now realize I had another option I should have considered.  I should have bought the petticoat and worn it home over my suit-pants.  That way, it would have made it safely to my closet and not been lost in a black hole.  I might have attracted some attention on the road, but at least I wouldn't be pining here for The Lost Treasure Of Long Island.

What would you have done?
Posted by Shybiker at 5:46 PM