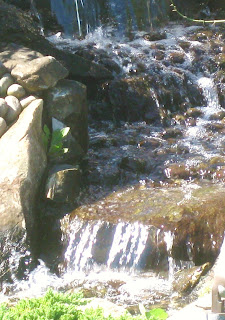 It's rare that I turn a client into a friend, but I did it with Larry.  Larry owns a small printing shop in town and, after representing him for a while, I decided to make him a friend.

Larry has a buoyant and appealing personality.  I'd frequently stop by his store and talk for hours simply because I enjoyed his company.  Larry is 45 years old, unmarried, and has been caring for his elderly father.

I went to the hospital today.  Larry just had a heart attack and a stroke.  The stroke paralyzed his left side and caused some permanent brain damage.  The extent of the brain damage is unknown and his recovery will be uncertain.  Fortunately, Larry can think and speak, but they doubt he'll ever be able to walk again.  His face droops on the left side which may or may not improve.  He faces six months to a year of difficult physical therapy.  Nobody can predict how far he can come back.

Larry cried when he saw me.  His brother said he's depressed at the drastic change in his life.  I believe that when Larry saw me see him in this new diminished condition, it reinforced the realization that his life will never be the same again.  His future will be severely limited by these physical conditions.

I spent over an hour at the hospital until Larry got tired.  During that time, he cheered up a bit.  I tried to focus his attention on the positive things still in his life.  I didn't show him my emotion which was profound sadness.  Larry, previously so buoyant and happy, is now a shadow of that man.  He's smaller, weaker, his head is misshapen and he can't move half his body.  I searched for the Larry I knew in this stricken body and found him, but that person is trapped in a limp shell that no longer responds to his brain.  And I sensed a deep malaise in him that is as understandable as it is sad.

My point in telling you this story is this -- savor your health and good fortune.  Enjoy the gloriously normal life you have.  We can, in a blink, lose that.  Appreciate your health while you have it.
Posted by Shybiker at 6:50 PM