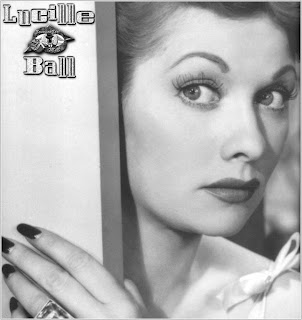 Unlike most early TV stars, Lucy is known to many of us from the widespread syndication of "I Love Lucy."  That classic show starred her husband at the time (Desi Arnaz as Ricky Ricardo) with Vivian Vance and William Frawley as Ethel and Fred Mertz, their neighbors and friends.

The antics Lucy got into, with their effects on her marriage, were naturally hilarious.  We can all relate to her good intentions and mistaken choices.

One of TV's earliest woman-writers, Madelyn Pugh Davis, was credited by Lucille Ball as helping refine the Lucy Ricardo character.  Davis died only this year at age 90.

Lucy's real-life daughter, Lucie Arnaz, says we should celebrate her mother's life because "she had one of the best lives ever."

Have you seen Lucille in anything?  In addition to her TV show, she did many movies, including "Stage Door" (with Katharine Hepburn and Ginger Rogers) and a 1974 re-make of "Mame".