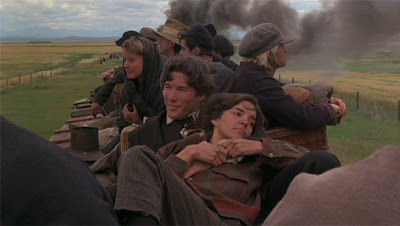 There are certain films that affect us deeply because we see them at a point in our life when their meaning resonates.  Let me tell you about such a movie.

Growing up in boring surburbia, I hungered for art.  Real art.  Art that informs and transforms.  Art that opens doors to new worlds.  I wanted to explore and go beyond my pedestrian life.

I saw my first art-film in 1978.  It was glorious.  Not merely masterful, but amusing and transporting.  It portrayed an unknown time and environment, with complete verisimilitude.  It told a story as basic as a biblical tale.

The movie is "Days Of Heaven", made by Terrence Malick.  Malick is one of the most respected filmmakers of our time.  His work is similar to Stanley Kubrick's in visual beauty and cosmic content.

The movie stars Richard Gere, early in his career, looking impossibly handsome.  And Brooke Adams whose face is remarkable -- her downturned lips look alien and her olive-shaped eyes are mesmerizing.  Her odd beauty is sublime.  And, central to the film, is narrator Linda Manz portraying an uneducated yet wise youth with an accent that fascinates me.  "I been thinking what to do wit' my futcha. I could be a mud docta. Checkin' out the eart'. Underneat'."

Malick has made six films over the past 40 years and they've all received critical acclaim.  His latest, "The Tree Of Life," starring Brad Pitt, garnered fervent praise this year at Cannes.  Malick is unusual for a filmmaker -- he was a Rhodes Scholar, studied at Oxford and, for years, taught philosophy at MIT.  An intelligent  man who ponders the real mysteries of life.  The exact opposite of a Hollywood hack.

"Days Of Heaven" was nominated for four Oscars and won one for Best Cinematography.

This film works on so many levels and succeeds on all of them.  It's a visual treat, a ticket to a different place and time, and an engaging story.  Something new and interesting happens in each frame.

If you're open to art, give it a try.  Thirty years later, I vividly remember each scene. 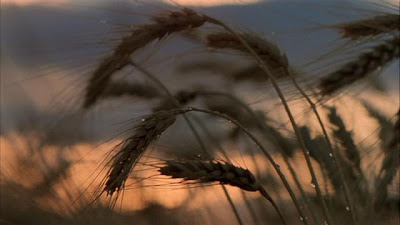