I was aware of the transformative power of makeup, but I had no idea how extremely strong that power can be.  Before today, I only saw my favorite TV actress, Sofia Vergara ("Modern Family"), with heavy makeup on.  Then, when I saw how she looks without makeup, I literally did not recognize her.  She looks like an entirely different person!

Here she is in two pictures, taken only hours apart.  In the first, she's unadorned; in the second, a team of makeup and hair experts have done her over.  What do you think? 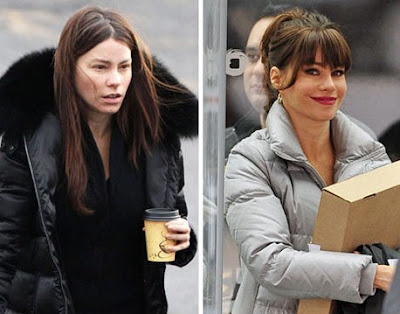