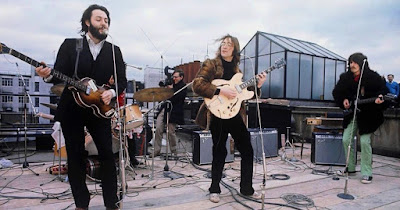 It's surprising how you can look at something, have a reaction, and then look at the same thing later with a totally different reaction. That just happened to me when I re-watched The Beatles perform their last concert, a spur-of-the-moment one on a London rooftop in 1969.
The first time I saw the concert, fifty-two years ago, I admired the band's artistry. If we're being honest, I also envied how they were literally the most famous people on the planet at that time. There was no question about their premier status.
Now, I feel sorry for the Fab Four. Sad that two of them (John & George) died early deaths, one suffered a horribly bad romance (Paul), and the other (Ringo) simply slid into obscurity.
We can't freeze time and as it churns, our view changes. Prepare for this; it'll happen to you.