"The Original Soundtrack" by 10cc

Do you like the song "Bohemian Rhapsody" by Queen? Well, I have a treat for you.

That song was inspired by an earlier tune by 10cc, a British band. In the Seventies, 10cc was the most inventive group of musicians working. Talented at writing and playing multiple instruments, they created amazing songs bordering on bizarre. 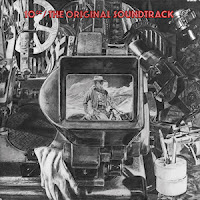 Their best album, "The Original Soundtrack," brought them critical and commercial success -- including a song that was hugely popular in the U.S. and is still played today -- "I'm Not In Love." Even if you don't recognize the title, you've probably heard the song on the radio. (Okay, maybe on your phone or computer, you streaming youngsters.)

The album opens with a three-part mini-operatic song called "One Night in Paris." As engaging as it is weird.

My favorite song is "Life Is A Minestrone," a truly weird tune. Infectious and weird. You have to hear it to grasp what I'm saying. Surprisingly, despite its oddity, the song was a hit in both England and the U.S.

Have you heard of this group?
Posted by Shybiker at 10:49 PM