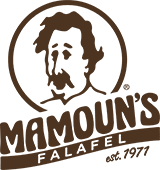 Forty years ago I had falafel for the first time. It was my first taste of Middle Eastern cuisine which I've grown to love. The restaurant that served this foreign, new food was a tiny place in Greenwich Village (NYC) named Mamoun's Falafel.

Falafel and all Middle Eastern food varies widely from place to place due to differences in seasonings and quality. Of the thousands of falafel balls I've eaten since Mamoun's, none have equaled its freshness, flavor and amusing green interior.

Imagine my delight when Mamoun's recently opened a new place ten minutes from my office in Woodbury! Tasting those same balls in the same green color transports me back in time. I remember wolfing down falafel sandwiches at two in the morning on MacDougal Street after nights of city excitement. The new place is decorated with pictures of that location in the Seventies. I actually checked the photos to see if I'm in any of them.