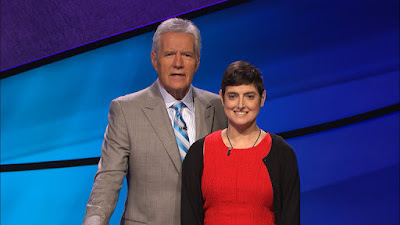 This is a sad and moving story (reported in The New York Times).

A 41-year old woman from Texas named Cindy Stowell competed on the TV game-show "Jeopardy!" The show was taped in August and is now being broadcast. At the time of the taping, Cindy was dying -- she had Stage 4 cancer and on painkillers. Two weeks ago -- before the show aired -- Cindy died. We are now watching her on television after her death.

Cindy told the producers of the show about her health but they didn't disclose it to the other contestants to avoid affecting the competition. Cindy donated her winnings to cancer research. On the show, if you win, you come back the next day to keep competing. On the episode aired today, Cindy won for the fifth day in a row and she'll be back on TV tomorrow (ABC). The show is not revealing how many days Cindy won before being de-throned.

It is heart-breakingly poignant to watch this smart, young woman win over and over, knowing that she was dying at the time and is now dead. Tune in tomorrow.
Posted by Shybiker at 7:46 PM