Requiem For A Beast 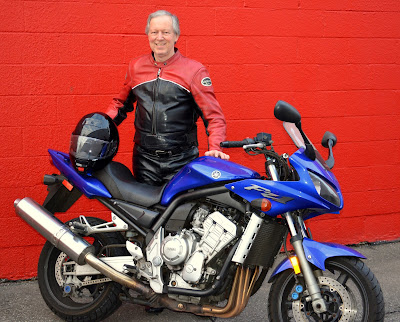 I said goodbye to my beloved Yamaha FZ-1 yesterday. Actual tears came to my eyes.﻿

This powerful sportbike was the first motorcycle I ever bought new; previously, I'd only had used bikes. In 2003, I plunked down $8,000 and brought home a sparkling, intense monster. Not only was the bike my first new machine, it was my first high-performance vehicle. Designed for racing, the motorcycle had the fastest engine available at the time, pumping out 160 horses on a lightweight body of 450 lbs. It accelerates faster than the laws of physics allow -- riding it is like being shot out of a cannon. Space and time warp; your perception of reality distorts. The experience is not unlike the effect of hallucinogenic drugs.

Of course, I got addicted to the thrill of riding it. While I keep a touring bike in my stable for comfortable long-distance rides, the Yamaha is what I wheeled out for Sunday fun. The bike amazed and delighted me with its capabilities. Trying to stretch to reach its limits, my riding-skills improved dramatically. I leaned further into curves, I developed more refined control of the throttle, I learned to brake in astonishing time. In fact, if it wasn't for the peak-level brakes on the Yamaha, I never would have been able to extricate myself from numerous dangerous situations that its power got me into. 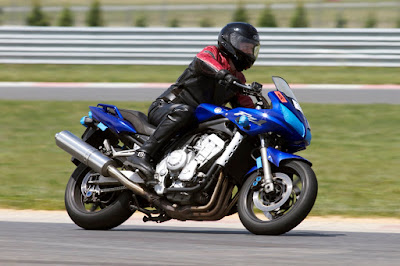 No motorcycling experience will ever top the day I took my Yamaha to a racetrack. Riding with the best motorcyclists around, I exercised my beauty and let out its beast. Not only did I reach 140 mph on the straightaway, I dived deep into S-curves and scrapped hard-parts on the turns. I came perilously close to crashing once but pulled out of danger through guts and sheer will-power. (Five guys did crash that day; it's common at the track.)

Those of you who follow my blog know that the Yamaha was stolen last September. Out of my backyard in the middle of the night. I was crushed. The police advised me to abandon hope of its recovery; stolen motorcycles are rarely found. But the next month, the police arrested the thief when he ran out of gas on the side of the road. As they pulled up, he ran; they chased and got him. A 30-year old drug-addict who doesn't live far away from me, the thief has a long criminal record so they charged him with numerous offenses, including resisting arrest. His court case is pending.

It was because of that criminal prosecution that the police impounded my motorcycle until now. They called on Friday to say the bike was being released. So I went to the impound lot Sunday with a riding-buddy of mine who has a trailer and we brought it home. 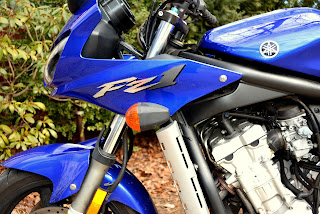 It was so sad to see my bike -- its beauty had been destroyed. The thief didn't have a key so he hot-wired the ignition, broke a locked gas-cap and sawed off the muffler. A careless tow by the cops destroyed the rear-wheel. Sitting outdoors all winter in an impound lot rusted parts. The bike was essentially trashed.

Despite its ruined condition, when I posted it on Craigslist Sunday I instantly got three dozen responses. This model is very popular and many guys are eager to buy it cheap and try to restore it. I didn't want to invest thousands to do that so I passed it on to someone else. I sold it to a NYPD cop who lives in Queens and wants a mechanical project to play with. I gave it to him for practically nothing because, when it comes to my hobby, money is unimportant. I'm glad he'll enjoy what's left of the bike.

Let me close with a few pictures. The first one is me astride the bike in red heels. The second shows Pandy, a friend I picked up in Long Beach at a summer festival. 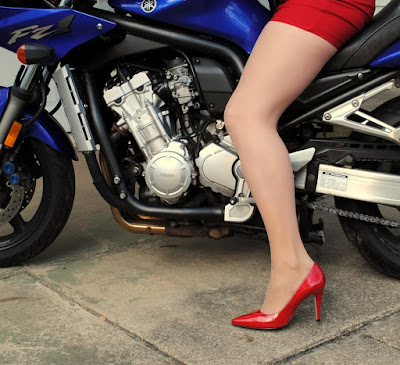 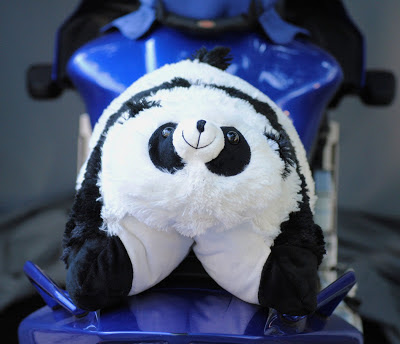 I spent many wonderful days basking in the radiant glow of a special machine. My Yamaha and I were dancing partners. We explored and enjoyed life with an intimacy that can't be accurately described.﻿
Posted by Shybiker at 11:04 AM