My new motorcycle is a BMW K1600GTL, the largest bike they make and the best touring machine on the road. I love it.

I name my motorcycles. It gives them personality. The GTL is no exception. Pondering names, I decided I want one with personal significance since I'll be closely attached to it for the next decade. I thought and thought about possibilities and then... suddenly, the perfect name hit me.

Fifteen years ago, I met a fellow motorcycle-rider named Geoff. Geoff was eager to join a motorcycle club of which I was then President. I considered it my official duty to welcome him. Geoff, candidly, was a little odd. Super-smart but odd. He had no close friends and was desperate to make some. People caught a whiff of his desperation and backed away. Also, Geoff was naturally irreverent which is a quality many ordinary people don't appreciate.

I have sympathy for odd ducks. Lord knows, I'm one. So I befriended Geoff. Spent time with him. Listened to his stories and dreams. We rode together, hung out and got closer. I came to appreciate Geoff for who he was, not what society thought of him. Geoff was truly brilliant and had an impressive job at an international company working on cryptography (which uses math to encrypt digital information, like communication of financial data between banks).

Being Geoff's friend was fun. After he moved to Maryland, I rode down and visited him. He bought an incredible mansion with the most luxurious guest-accommodations I'd ever seen. His living room had 30-foot high ceilings and Geoff, skilled at electronics, designed his own audio/entertainment system. Long before the idea became popular, Geoff tried to invent an electric-powered motorcycle. It stalled because battery-technology at that time was too rudimentary.

Then, four years ago, tragedy struck. Geoff -- who was young and vibrant, in his forties -- got cancer. The quick kind. A brain-tumor grew and killed him in less than a year. Nobody saw it coming. On the nightstand next to his deathbed, Geoff had a framed picture I sent him showing Geoff relaxing on his favorite motorcycle. I know he looked at that image with fond memories amid his failing health.

I posted here about Geoff on the day of his untimely death. The event occurred this time of year (December 30, 2012). Death is sad but especially so when it happens to a young person. Someone you expect to spend the future with, but won't.

In honor of Geoff and to keep his memory alive, I'm naming my new bike after him. Now, when I talk about my motorcycle with bright joy, I'll remember Geoff the person, Geoff my friend. He'll be with me as I ride into the future. 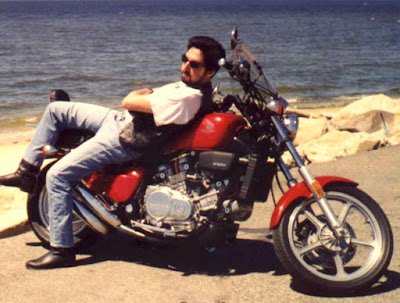