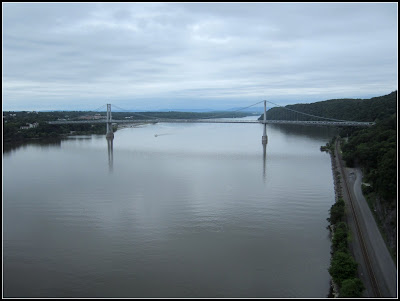 When you travel, you tend to pay more attention to your surroundings and experiences. That happened to me on my recent motorcycle trip. Here were some observations...

- Every time I ride a motorcycle over a bridge, I turn into a 5-year old boy. Wheee!!!

Being up so high, without a cage around you, exposed to the air and sights, you are confronted with reality. The view isn't a televised one; you are actually present and existing on a larger scale than normal. The magnitude of reality and our small place within it viscerally feel like they should.

I wasn't paying much attention until I heard him say that women shop more than men. He started lecturing his wife on what women like to buy, how shopping meets their suppressed emotional needs, and why they engage in such odd behavior. All the time he's saying this, he's talking TO A WOMAN! How clueless is someone to tell a woman about female life? He achieved a rare combination of arrogance and obliviousness. Have you ever met anyone like this?

- I approached a milk/sugar counter with my cup of tea and saw an older woman fixing her coffee. I waited for her to finish instead of reaching across her for milk and sugar. I believe behavior like that is rude. As she turned to leave, she looked me in the eye and said, "My! You are so polite! Thank you." Then she smiled.

Have we become a society where it is okay to jostle others and be inconsiderate? Has common courtesy disappeared? Maybe that's the case with many people but I refuse to behave badly. I'm polite in every situation and act that way because I believe in courtesy. Rudeness by others isn't deterring me in this regard.

What do you think?
Posted by Shybiker at 8:38 PM