Last week I saw the best performance of the year by one of our finest actors.  If there's justice in the world, he will win the Oscar for Best Actor.

You may not know Chadwick Boseman now but you will soon.  He did a great job last year portraying Jackie Robinson in the movie "42".  (See it if you haven't.)

In the new "Get on Up," Boseman inhabits James Brown.  He studied Brown's physical movements and nails them.  Just the way he stands convinces you of the portrayal.

The film explores and explains who James Brown was -- a complicated, flawed man with immense musical talent.  Brown, abandoned by his parents, learned self-sufficiency and never outgrew it.  He climbed in a competitive business, outsmarted businessmen who wanted to exploit him, and survived with a long career.  Yes, he had faults but the movie puts them in perspective.

James Brown was a force of nature.  His funky groove was electrifying.  This film succeeds at capturing and portraying that.  Since watching the movie, I downloaded Brown's live concert at the Apollo Theatre in 1969 and have been listening to it non-stop.  The man had soul.  And energy.  And more soul.

Have you heard his music? 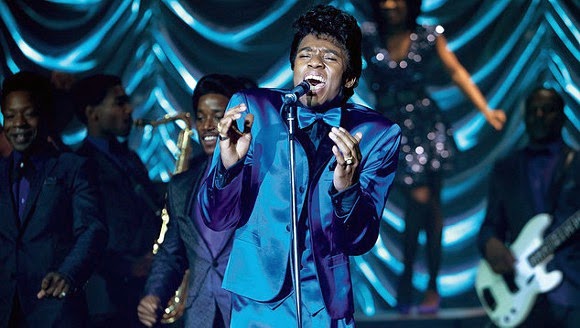