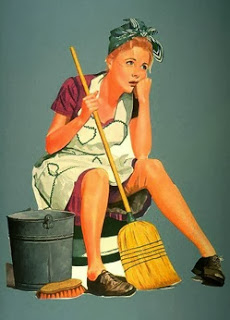 The New York Times just reported the results of a study on housework.  The study had two major findings, both of which are fascinating.  I want to throw those ideas out to you for discussion.

The study examined changes in housework over the past fifty years.  It looked back at what your families were doing when your parents were young and compared that to what your generation is doing now.

First, researchers examined the extent of men's performance of housework in homes shared by a heterosexual couple.  What they learned is that young men today are doing no more housework than their fathers did.  This surprised researchers who were looking for and expecting an increase for men.  The common belief that men are becoming less sexist wasn't proven in this regard -- men remain largely unwilling to pitch in with housework.

Does this accord with your experience?

The second finding is equally interesting.  The hours per week women do housework has decreased by roughly one-half.  This isn't because men are doing more; it's because less work is being done.  What used to be considered essential housework is now left undone or thought of as optional.

I find this to be true.  When my mother cleaned our home, she would spend hours vacuuming drapes, ironing sheets and polishing "the silver".  Today, we rarely see anyone do these chores.

What do you think?
Posted by Shybiker at 4:33 AM