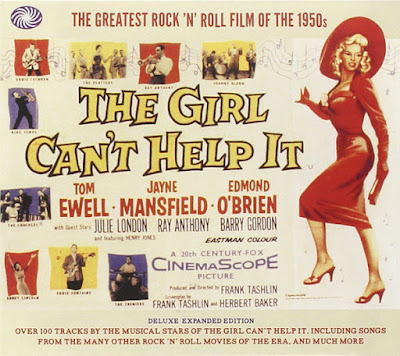 Do you want to have a weird but fun experience?

There are times, like the 1950s and 1960s, when culture shifts dramatically. New views, reflected in cinematic entertainment, replace older ones. Sometimes, and this is rare, both new and old approaches confusingly appear in the same movie. Here's a perfect example.

"The Girl Can't Help It" was made in 1956. It was intended as light comedy, establishing Jayne Mansfield as a "sexpot" (a term they used back then). Much of the movie is a dumb running-joke depicting how Jayne's body has such an ultra-feminine shape that it renders men speechless. The view accurately reflects early-Fifties culture on gender.

During the making of the movie, however, producers felt the film needed something more to appeal to young people -- so they added wildly discordant scenes of nascent rock-n-roll. Amazing musical performances were added by emerging rock stars like Little Richard, Fats Domino, Gene Vincent, Eddie Cochran and The Platters. About a third of the movie are fabulous concerts by young musicians who would go on to later rock stardom. (This is the new clashing with the old.) These scenes alone are reason to watch the movie.

Plus there's another reason: the movie is justly credited with being the catalyst for formation of the greatest music group of all time (The Beatles). Teenage Paul McCartney was entranced by the performances of his idols in the movie and learned how to imitate them. When Paul met teenage John Lennon, Lennon was hugely impressed by Paul's imitation and both of them became obsessed with the movie when released in Britain in 1957. The rest is history.