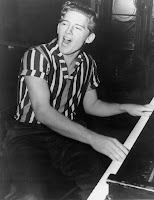 A decade ago I saw a terrific show on Broadway ("Million Dollar Quartet") about the true story of a 1956 jam-session at Sun Records by four musical giants: Elvis, Johnny Cash, Jerry Lee Lewis and Carl Perkins. Last week I took Robin to see it again at a local theater in Northport. The productions were both magical.

Jerry Lee led a wild life. After a meteoric rise, his career crashed when it was revealed he'd married his 13-year old first cousin Myra when he was 22 years old. Amazingly, she was his THIRD wife. He married twice earlier and neither divorce was settled before he moved on to the next one. Since then, Jerry Lee married four more times, for a total of seven wives.

My favorite Jerry Lee story is when he got busted in 1976. It was 3:00 in the morning, he was drunk and somebody lent him a gun. So what does he do? He drives over to Graceland, accidentally crashes through the gate and demands to talk to Elvis. Elvis refuses to see him and calls the cops. Probably a wise move since Jerry Lee had a history of violence and once came close to killing his bass player.

It's probably also not a surprise that Jerry Lee had IRS troubles. He owed the government over $2 Million and they seized all his assets (including five motorcycles). As I said, he is a character. I'm amazed he's still alive.
Posted by Shybiker at 5:15 PM