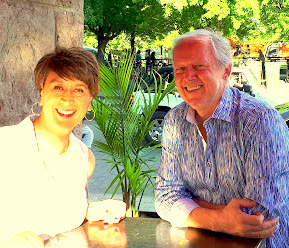 While I was in Montreal, I met Joanna, a blogger I've followed for a few years. It was our first time meeting in person.

Joanna blogs about two passions. The first is her transgender-ism and many technical aspects of the subject. Joanna is an engineer and very intelligent; her understanding of this subject is deep. The second subject she covers on her blog is American politics. That's a little unexpected since Joanna is Canadian but many around the world have been alarmed at U.S. politics since the last election.

We were both a little surprised at how many experiences we had in common from struggling with being transgender. While we are different people, Joanna and I have both faced several of the same situations, ones cis-gender folk never confront. Thus, it was valuable to share our life histories and stories. It isn't always easy to find a path in life when you're different.

Joanna wrote about her take on our meeting here. It was a pleasure to make her acquaintance and I'll see her the next time I head back to Montreal.

P.S., I bought this colorful shirt earlier in the day at a high-end men's store (Boutique Emmanuel). It's created by a Montreal designer (Dominique Leneveu) under the brand Franco Negretti. Expensive but I love it!
Posted by Shybiker at 6:51 PM