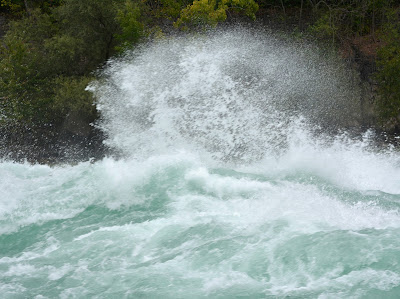 We think of time as an absolute concept, measured in ticks of a clock. But, even putting aside the vagaries of quantum physics, our perception of time is relative. A good example comes from sports.

Baseball players say that when pressure mounts (like the bases getting loaded), time speeds up for them. Anxiety causes their heart to pump harder. Because time is passing more quickly, they're prone to making stupid errors they'd never make when relaxed. Coaches tell them to SLOW DOWN. Slowing down their body's perception of time allows them to relax and return to normal performance.

The same thing happens to inexperienced car-drivers and motorcycle-riders. Encountering dangerous situations, some panic -- and that's exactly the wrong thing to do. Panic causes our brains to race, depleting us of normal skill. For example, instead of steering away from an oncoming vehicle, panicked operators close their eyes and crash. Their minds fearfully let external factors determine the outcome instead of trying control it.

I've learned to ride my motorcycle in a relaxed state, even when situations are risky. In risky traffic where a millisecond can mean the difference between life and death, I never panic. On the racetrack, sweeping through sharp curves at 120 mph, I stay calm. It isn't easy but this is a trait you can learn. Nobody is born eternally calm; it's a mental tool you develop.

Have you ever felt time "speed up" in a moment of panic?
Posted by Shybiker at 8:02 AM