The Return Of Happiness 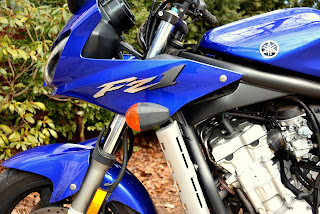 The police called and told me a guy was arrested yesterday riding my motorcycle. He was on the Stony Brook college campus. It's unclear if he was a student or visitor.

The bike was impounded and is being held as evidence. I hope to get it back this week. I'm praying it wasn't damaged too badly. At the least the ignition wiring had to have been stripped because the thief didn't have a key.

They found the guy when a routine license-plate search reported the bike as stolen. What kind of half-wit steals a motor vehicle and doesn't change the license plate? They teach you that on the first day of Auto Theft 101.

Honestly, I'm relieved. I was starting to suffer from rider-withdrawal. It's is a real, debilitating ailment. Ask any biker.
Posted by Shybiker at 9:11 PM