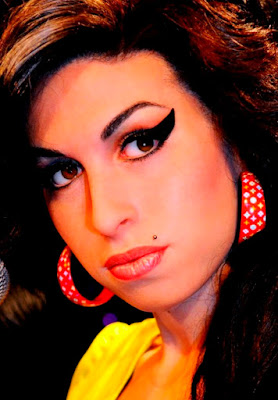 I didn't really grasp who Amy Winehouse was until last week when I saw a new documentary about her, called "Amy." The film describes her life from childhood until death four years ago at age 27.

Using actual footage, the movie reveals bad parenting, bad boyfriends and bad choices. Amy suffered from bulimia most of her life and it weakened her heart.

At the same time, she possessed exceptional musical talent. Her songwriting, coupled with jazz-based vocals, were top-notch artistry.

There is much about Amy I never knew, starting with the fact that she was Jewish. Before Amy adopted the Ronnie Spector style of hair and makeup, she looked like an ordinary chubby girl. Amy was unprepared for the assault that fame waged on her personal life and it pushed her over the cliff. She lacked support from family and friends; her professional entourage exploited her more than it helped.

If you want to learn more about her, see "Amy." It is both entertaining and heartbreaking.
Posted by Shybiker at 10:19 PM