When I was a child, I wanted to be a secret agent.  My favorite TV show was "The Man From U.N.C.L.E."  Its star, Robert Vaughn, portrayed Napoleon Solo, a secret agent who was suave and debonair.  He had confidence, poise and strength.  I was seven years old when the show started, an impressionable age.  I styled my hair to look like him.

I've never outgrown my ambition to be a dashing spy, skilled in subterfuge and armed with neat espionage gear.

Last month, I watched all five years of "Alias", a TV show that ran from 2001-2006 and starred Jennifer Garner as secret agent Sydney Bristow.  In every episode, Sydney broke into a secure location by picking door locks.  It is a neat skill to have.

I'm proof that you're never too old to live your dreams.  So...  I studied and learned how to pick a lock.  It's actually not hard.  Once you grasp the concept, it just requires a little practice to get the feel of it.

Locks are interesting mechanical devices whose design hasn't changed in over a century.  Once you understand how they work, it isn't difficult to defeat them.  You just need two tools, a tension wrench and a pick.

I just bought those tools in a set suitable for secret agents -- they come concealed in a credit card!  The credit card slides open to reveal the hidden tools.  See the pictures below and note the name on the card.

Did you have any dreams as a child?  Is it possible to achieve them now?  Can you borrow some ice skates and win a local figure-skating competition?! 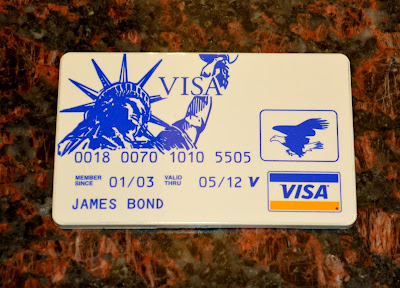 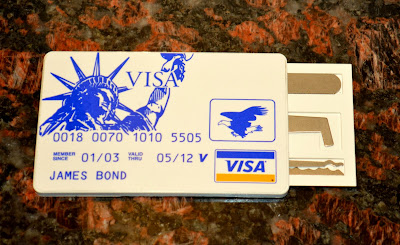 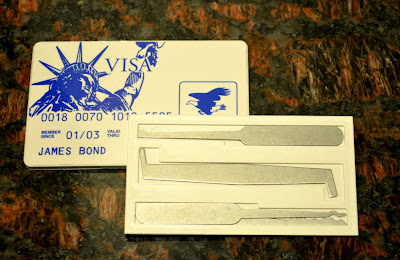