You didn't need to watch the VMAs last Sunday to hear Miley Cyrus scandalized the nation with a sexually-provocative dance -- the story was ubiquitous this week.  Every news organization covered it and dozens of articles were written feverishly debating whether her musical performance is a sign of The Decline of Civilization.

It's valuable to actually watch her performance before judging it.  You can see it here.

Personally, I'm surprised that people are surprised.  Performers who seek attention have been transgressing cultural boundaries for generations and using sex as a tool to attract attention is nothing new.  In my youth, Madonna became a star by outraging parents with overtly sexual dances, songs and outfits.  I don't understand how the new performance by Miley differs from what Madonna did three decades ago.

How do you feel about this story?  Is it Miley's past as a wholesome Disney child-star that upsets people who can't see her in an adult light?  Is it that we believe sexual display is inherently wrong or degrading to women?  What explains the social attention this got?

My favorite aspect of the national uproar is a satirical piece in The Onion which captures the cynicism of CNN in its reporting on the controversy.  You can read it here. 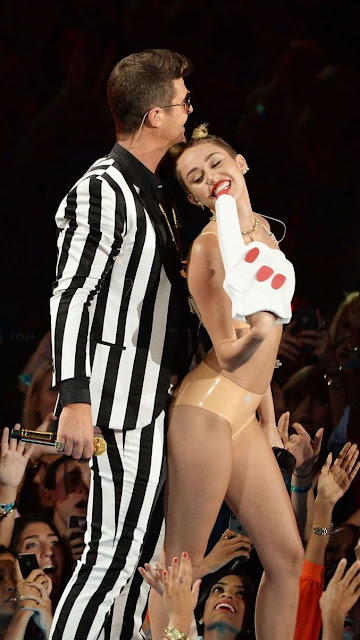