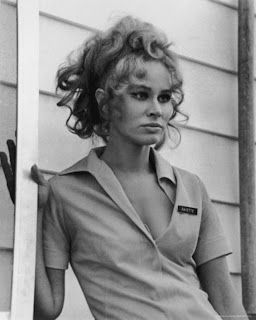 Karen Black was an exotic beauty from my youth.  She acted in literally hundreds of movies over the past half-century.  She just passed away at 74 from cancer.

I was initially drawn to Karen by her face -- she had a very unusual face.  I was entranced by its oddity and couldn't stop looking at her.

Karen was nominated for an Oscar for her role in "Five Easy Pieces," a classic Jack Nicholson film (1970).  She later appeared in dozens and dozens of TV shows and movies.  My favorite film of hers was a little known Robert Altman movie called "Come Back To The Five And Dime, Jimmy Dean, Jimmy Dean" (1982) starring Cher in her first good performance, Karen Black and Sandy Dennis.  In the film, Karen plays a gorgeous woman who returns to her rural hometown in a flashy sports car.  Everyone wonders who she is, especially since she greets everyone by name and seems to know who they are.  It's later revealed, to the shock of all, that she was a pudgy boy who they used to make fun of who changed her sex during her time away.  Thirty years ago, that was startling.

Have you ever heard of her?
Posted by Shybiker at 8:46 AM