The Tree Of Life

The park I visit is a hidden gem -- 2,000 acres of virgin land, preserved in natural condition since the first Settler acquired it from the Indians.  Few people know about the park, which I find remarkable.

Within the park is a majestic tree, hundreds of years old.  It is huge in size and attractive in shape.  The tree is ancient and grand.

During my last visit, a young teenage girl rode her bicycle down the grass to the tree and perched on a lower branch.  The scene was striking, both visually and metaphorically.  Here was a contemporary girl, in her impermanent youth, connecting with an elder being who had seen the Revolutionary War.  You sensed she felt a connection to the tree which was manifest in her physical interaction with it.

I previously gave you a glimpse of this scene in a truncated photo.  Now, I want to show you the entire experience, both from a distance (to show the relative sizes of the two beings) and close-up (to show you their interaction).

Do you have any favorite trees? 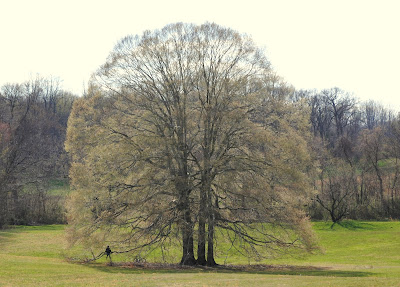 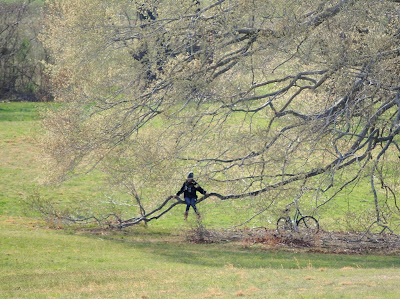