Blog Of The Year - Story 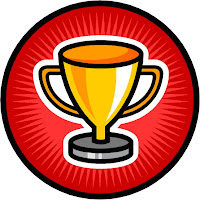 Real life is stranger than fiction.  I'm constantly amazed by interactions I have.

There's a trophy store near me that's been around forever.  At least 30 years.  It's owned by a guy named Dick who's now in his sixties.

For my Bloggy Award which I'm giving next week, I want a bigass trophy.  A real trophy.  Metal, not plastic.  Something the recipient can proudly display on her mantel.

I start to explain, in generic terms, and he stops me.  "You mean, people write about their lives on the Internet?"  Yes, I say.  "Sounds awfully strange to me," Dick replies.

Are you working today?
Posted by Shybiker at 1:12 PM