Do you know who the first woman to go into outer space was? 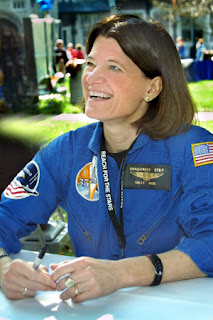 
Sally broke ground in 1983 when she blasted off into outer space on space shuttle Challenger. She returned to space a year later for a second mission.

Sally grew up in Los Angeles where she earned degrees in physics and English. She joined the NASA astronaut corps in 1978.  The requirements for that job were extremely demanding and it says a lot that she got in.

After her space exploits, Sally returned to Stanford University where she became a professor.  She also wrote five science books for children.

Have you heard of Sally?
Posted by Shybiker at 7:08 PM