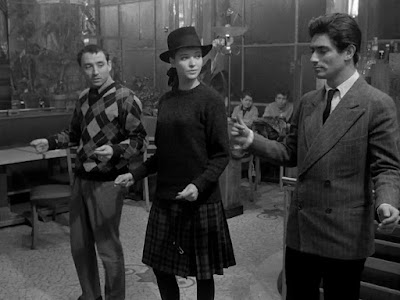 Jean Luc Godard died Tuesday. A film legend, Godard was best-known for "Breathless," his first of 44 movies. "Breathless" is a 1960 crime drama that introduced new cinematic techniques, like jump-cuts, and paid homage to film history. It shouldn't be a surprise that before making movies, Godard was a respected film critic.

Revisiting his œuvre I just admired "Band of Outsiders" (Bande à part). The work is many people's favorite Godard film, including Quentin Tarantino. The film stars Godard's muse at the time (Anna Karina) as the linchpin of a three-person heist. Anna was an "effervescent free spirit of the French new wave;" she was also a widely imitated style-icon of the time.

There's an unexpected, oddly charming dance scene in "Band of Outsiders" that has been referenced many times in later films. The scene inspired the famous dance sequence in "Pulp Fiction" with Uma Thurman and John Travolta. Uma's black wig and iconic look was stolen directly from another character in "Band..." (seen in the bathroom just before the dance). You can catch the dance scene here; it's short and lots of fun to watch.