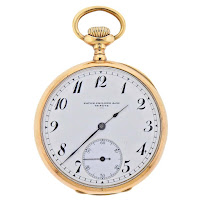 Did you know that before World War I wristwatches were worn exclusively by women? They were considered feminine jewelry. Manufacturers didn't make wristwatches for men.

So how did men keep time? With pocket watches. For several hundred years (17th-20th Centuries) men carried pocket watches. Today men wear wristwatches: when and why did that change?

It was World War I. In that conflict the military realized soldiers could do their jobs better if they could keep track of time without digging into pockets. A glance at a wrist told them the time while keeping their hands free to carry and use weapons. Not insignificantly WWI was the first modern conflict to use precise timing in military operations so this change in watches offered important strategic advantage. After the War, soldiers continued wearing wristwatches and sellers saw a lucrative new market.

When I was a teenager I carried a pocket watch in homage to horological history. I'm currently acquiring a new antique pocket watch and have found a rare, unusual example. It'll be a subject for future conversation.