"The Trial Of The Chicago 7" 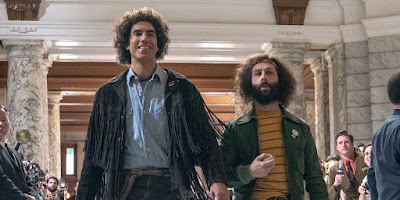 Aaron Sorkin wrote this movie a decade ago but couldn't find financing. That was a blessing in disguise because today the film resonates in ways it wouldn't have in 2007. Its topics -- governmental oppression of political dissent; police brutality; judicial corruption -- are visible in today's racial justice protests, connecting us to the Sixties.

Sorkin treats that tumultuous time with wide focus, not narrowing it to any particular character's view. That's a smart choice because it describes the Sixties in a general, accurate manner.

Sasha Baron-Cohen plays Abbie Hoffman, a mischievous Yippie. Back then, I bought and read Hoffman's famous work, "Steal This Book." My parents were aghast but the book taught me valuable lessons in living outside the box of social convention. The book was self-published after being rejected by 30 book publishers and many retailers refused to carry it. Canada banned the book entirely. Which made it all the more attractive to young readers at the time.