Today is actor Fred Gwynne's birthday. He would have been 96 years old. (He died three decades ago.) 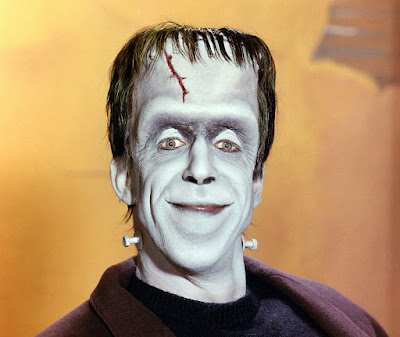 Everyone recognizes Fred from his iconic performance as Herman Munster in "The Munsters," a classic TV show from the Sixties. Even though it only ran for two seasons its impact was deep and lasting due to syndication.

Aside from an amusing role as a Judge in "My Cousin Vinny," my favorite perfomance of Fred's was "Car 54, Where Are You?" That was an earlier Sixties TV show which included Al Lewis (Grandpa on "The Munsters"). I saw Al Lewis in person in the 1980s when he owned a restaurant on Bleecker Street in Manhattan. Every day he stood there smiling at everyone. What a nice guy.

Life is funny and moves in unpredictable directions. For example, Fred Gwynne was born into a wealthy family, attended a fancy prep-school (Groton) and graduated from Harvard University. He acted in respectable plays by Shakespeare. One would never guess he'd be best-remembered for clownish Herman Munster, but there you go. :)