Visiting a thrift-store in Providence, Rhode Island this weekend, I bought a vintage dress. I purchased the dress not because it's special but because it isn't. Let me explain.

The dress perfectly embodies the style of a particular time. Its colors, cut and big shoulder-pads announce the era in which it was popular. Can you guess which decade it was made in? The answer is not hard.

Back then, I desperately wanted to dress like other girls and coveted this particular style. Seeing the item on the rack this weekend, I realized it's not too late to live my dream. So, despite the passage of time, I brought the dress home for an emotional journey. Donning the dress today is some consolation for not being allowed to wear it decades ago. 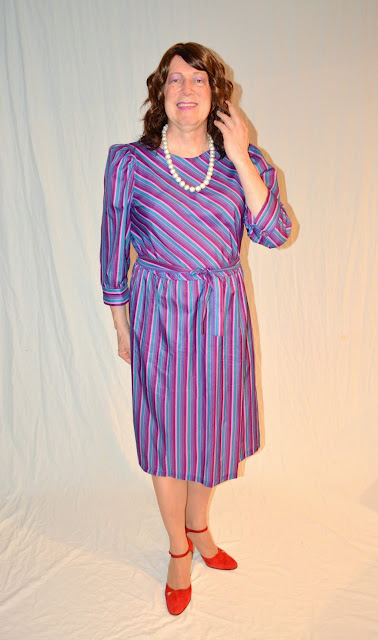 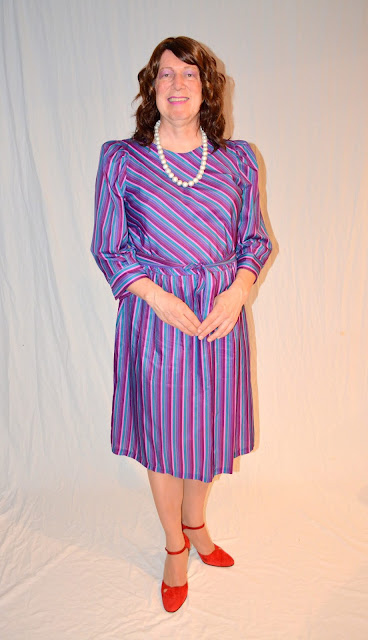 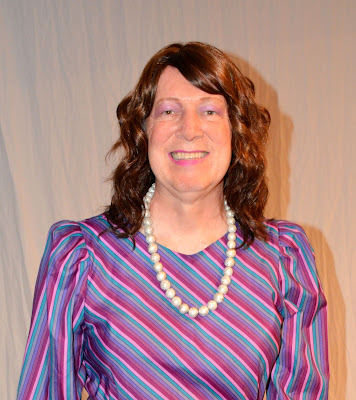 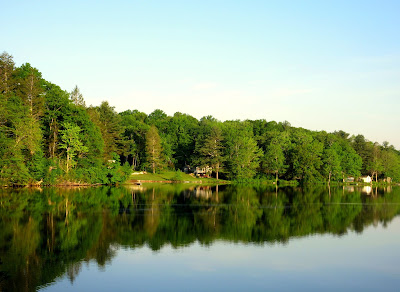 I love nature and I equally enjoy city-life. This weekend I combined both pleasures. While camping in a tent on the edge of a bucolic pond at a motorcycle rally in Connecticut, I bounced into Providence, RI for the day. I've never really visited Providence before so it was an exciting adventure.

I have excellent instinct for finding the best areas in cities. I quickly located P's fun-center which is Wickenden Street. Not surprisingly it's walking distance from RISD and Brown University. The bohemian neighborhood has hip coffee-houses, lots of vintage stores and a few used record places. I found a cute vintage dress (that will be worn here soon) and a Nina Simone CD containing my favorite song of hers ("Sinnerman"). Best of all, I spotted and brought home a cardboard cylinder-package from the 1950's for a white girdle. (Picture below.) I plan to use the package as a home decoration; it's delightfully evocative of that era.

Did you have fun this weekend? 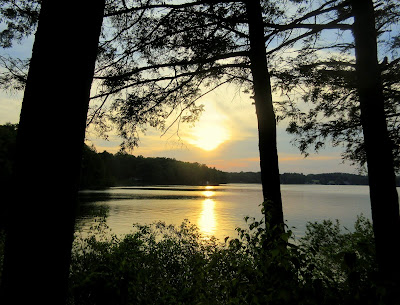 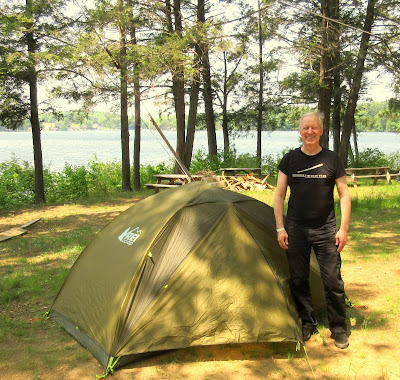 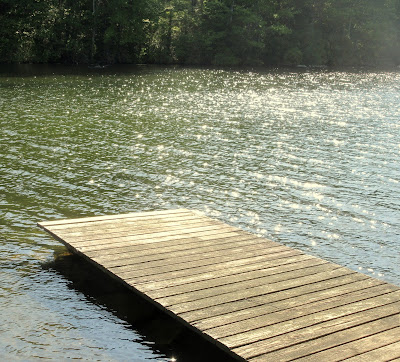 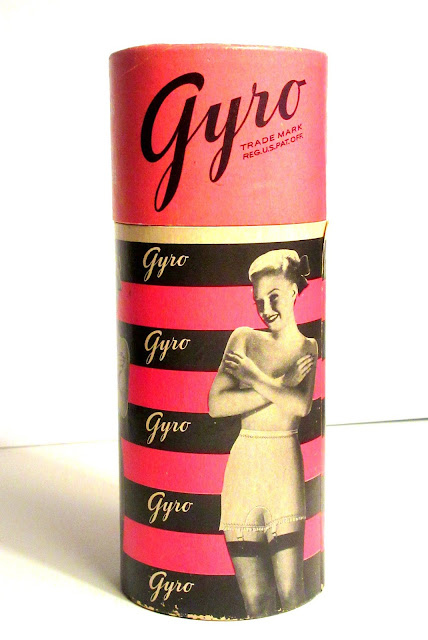 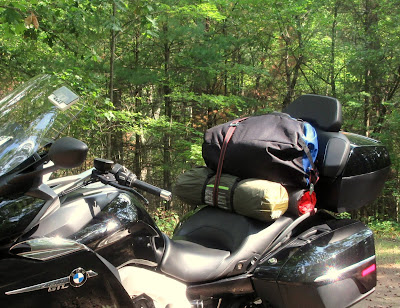 What are you guys doing this upcoming holiday weekend?

I'm riding north to the Charter Oak Rally, an annual BMW motorcycle event in scenic countryside with nice twisty roads. I'll tent-camp in the woods with other rugged riders and pop into Providence on Saturday to explore that small city.

In the near future, I plan on acquiring some new space and the question arises of what to put in it. It took me little time to arrive at a perfect answer -- a billiards table. I love shooting pool and would enjoy having my own table.

I'm looking at modern designs and found a couple of really cool ones. What do you think of these? Have you ever played pool? 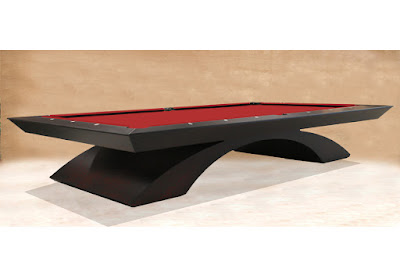 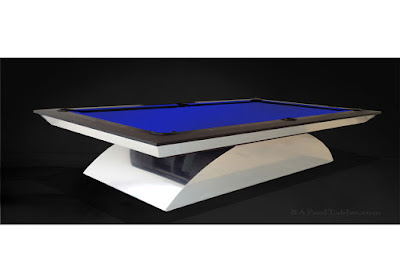 I have a question for you.

My Canadian friends introduced me to their native shoe-designer John Fluevog who's been making interesting shoes for men and women since the Seventies. His designs are so original and odd as to often look alien. Yet they have a strong appeal to those of us who value originality. Some of his designs don't even look like shoes at all and he uses really unusual materials (like dragon-skin). The best way to view his creations are as art on your feet.

Fluevog has stores in most big cities -- including NYC where I'm going tonight to dine and shop. I'm considering buying a pair of these beauties. Thoughts?? 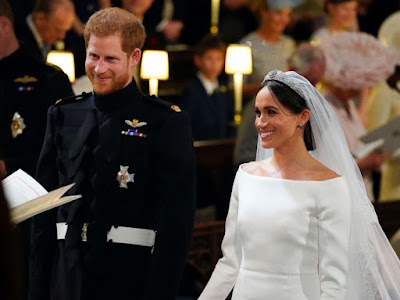 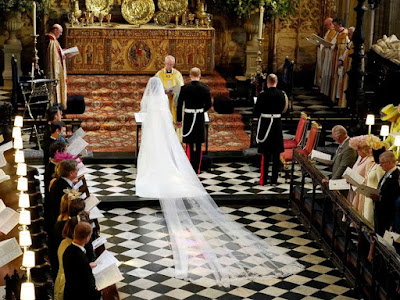 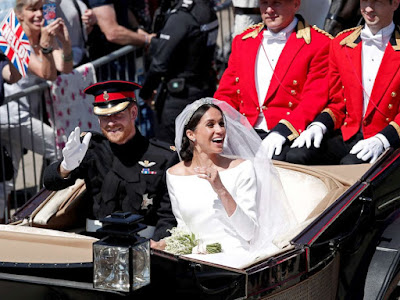 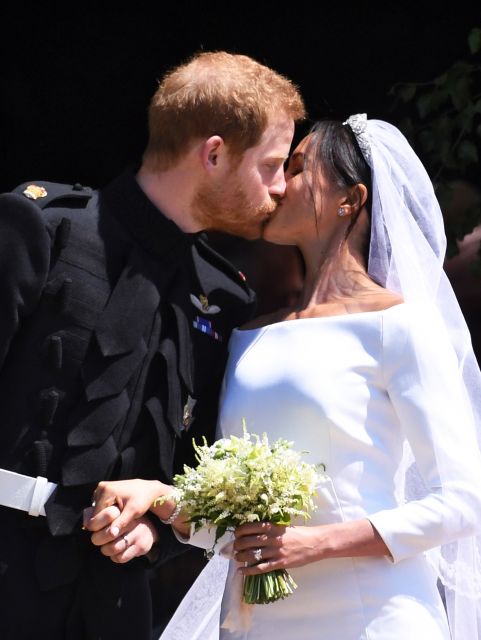 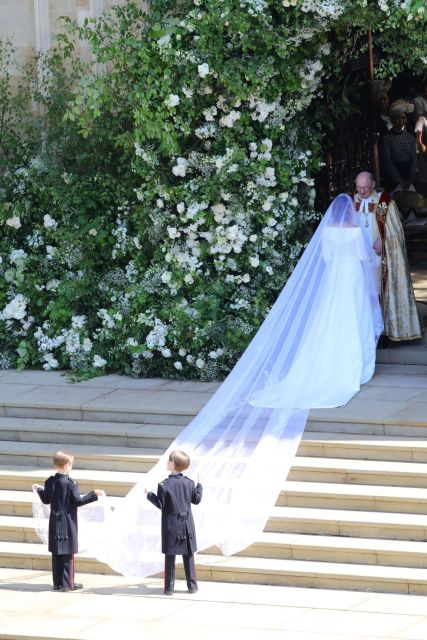 Did you watch it? What did you think? 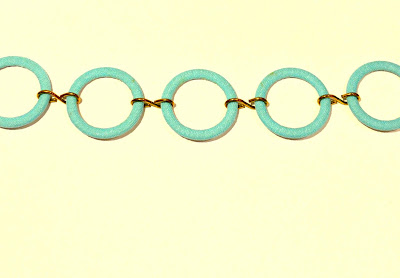 When I started blogging, Sheila, Suzanne and others gave me the same advice over and over again -- "Put a belt on it," they said. Honestly, this was good advice and eventually I learned to accept its wisdom. Belts define a waist (which is important for me) and create an illusion of curves (equally vital). I discovered belts give my outfits a more feminine appearance.

While browsing a vintage store, I found an authentic belt from the Sixties. I love its shape and color. What do you think?

How often do you wear belts? 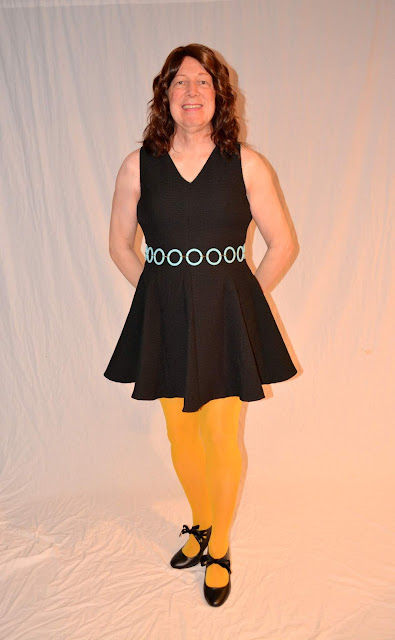 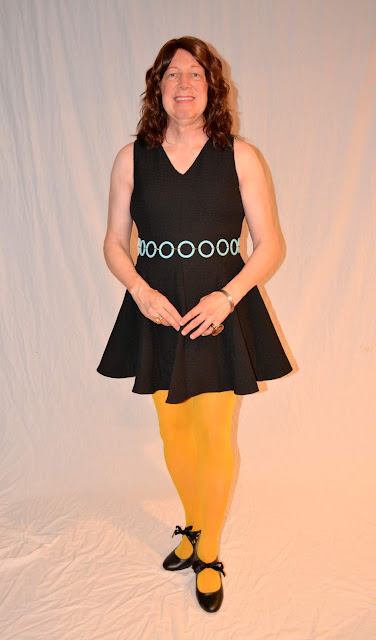 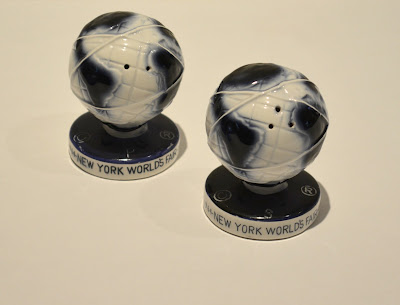 The best vintage store on Long Island (Rosie's Vintage Store) got in a bunch of quirky salt-and-pepper shakers so I went down and checked them out. I came home with these two beauties.

One depicts an old TV from the Fifties; the other celebrates the 1964 World's Fair. The latter has meaning for me since I not only attended but actually performed music at the World's Fair. My music school gave a concert in the main pavilion and, at 7 years old, I played Beatles songs on my accordion. I know -- cool music, uncool instrument. 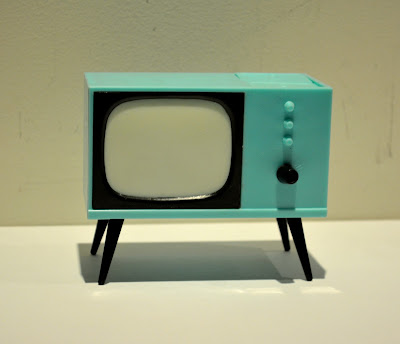 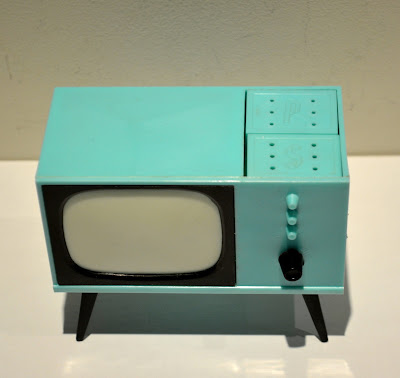 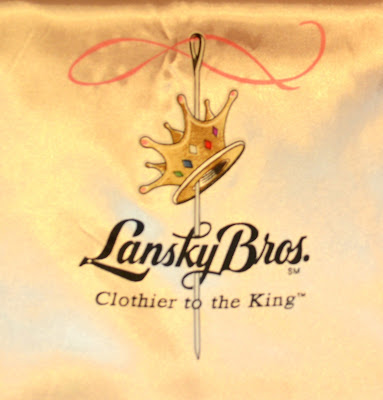 I struggled with a bad cold this week and am just getting over it. To celebrate returning health, I chose an outfit today which lifted my spirits. It also comes with a story.

A decade ago, I visited Memphis. While there, I shopped at legendary Lansky Brothers and bought the best jacket of my life.

In 1952, Bernard Lansky owned a men's clothing store on famous Beale Street in Memphis where he sold items he had personally designed. Bernard noticed a young man continuously walk past his window and look inside, but never actually came in. Eventually, Bernard went out and invited the man inside. It was seventeen-year-old Elvis Presley who was working at a local theater. Elvis explained he loved the clothes but couldn't afford them. Bernard took pity on him and gave him some clothes at steep discount. Later, after Elvis became an international superstar, Bernard Lansky designed much of Elvis's attire, including an outfit for his first appearance on The Ed Sullivan Show in 1956. "I put Elvis in his first suit, and I put him in his last," Bernard recalls.

Due to this association, Lansky's shop became known as "Clothier To The King." It still sells reproductions of clothing Elvis actually wore, combined with new 1950s-inspired clothing. Its motto is currently "Dress Like A Rock Star." Lansky's creations have bold designs and bright colors.

I found a jacket exactly like one Elvis wore. It appeals to me because of its racing style and silk interior, decorated with a beautiful logo. I cherish this jacket and will keep it until my dying day.

I pulled the jacket out of my closet today to wear with a black-and-white striped shirt, sharply-creased black pants and b/w-checkered Vans sneakers. What do you think?

It was a beautiful day today so I left work early and rode my motorcycle out to the East End of Long Island. There's a town named Greenport which is very chic. I dined, shopped and admired nature. That, and four hours of riding, are my idea of Spring fun. 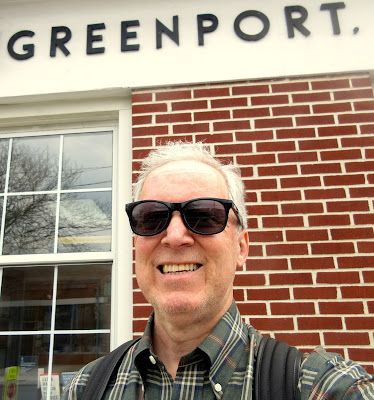 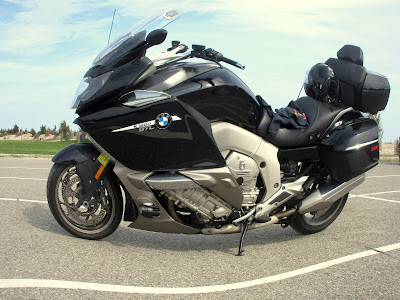 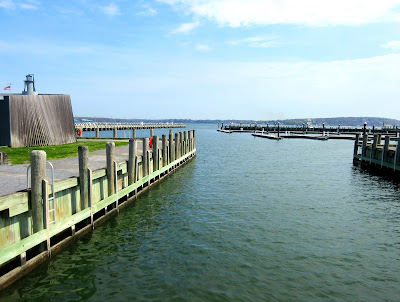 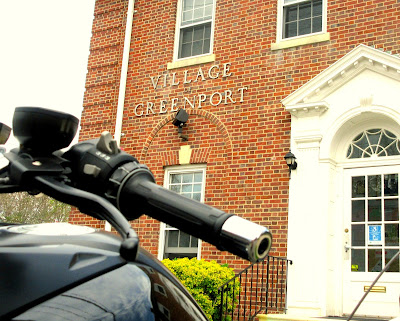 While shopping with Sheila in Victoria, I found a cute skirt and brought it home. I like the way the skirt looks and flares.

To complement it, I searched for an appropriate top. I found one at Fox's which sells designer clothes at deep discount. The top has ruffled sleeves made of leather. So cute! Best of all, the top goes with the skirt, in my opinion. 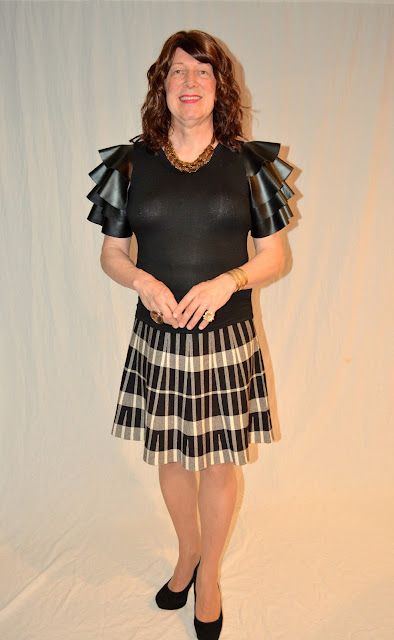 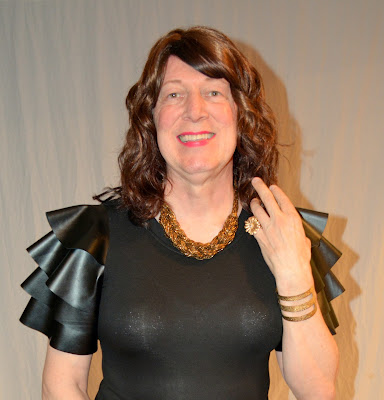 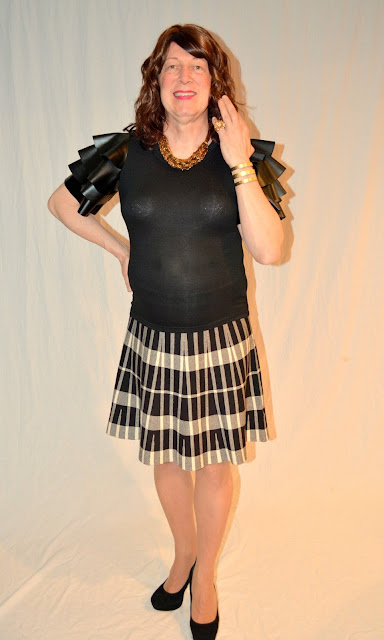